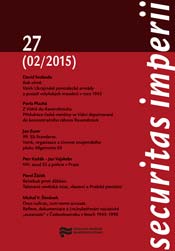 Summary/Abstract: The study analyses the creation, organisation and activities of the 99th SS-Standarte, one of 126 regiments of the Allgemeine-SS established on the territory of Southern Moravia and the north-eastern part of Lower Austria following the occupation of the borderlands. A general introduction to the Allgemeine-SS is followed by an outline of the incorporation of those parts of Southern Moravia into Lower Austria and a brief characterisation of the SS in Austria. The author analyses the composition of the 99th SS-Standarte, the location of individual units and the command structure, introducing the most important officers. He also describes service in the Allgemeine-SS and the Znojmo regiment, which predominantly involved doing sports, ideological training and participation in Nazi celebrations. With the outbreak of war most members of the 99th SS-Standarte were transferred to the Wehrmacht and armed SS units. The remaining men had two main tasks: the recruitment of young men to the Waffen-SS and looking after conscripts’ families. The study concludes with an exploration of Czechoslovak (and Austrian) judiciary’s post-war efforts to punish members of the Znojmo Allgemeine-SS regiment.