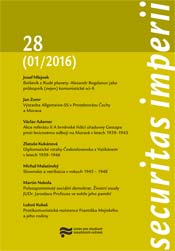 Nunciem a internunciem v jedné zemi. Diplomatické vztahy Československa s Vatikánem v letech 1939–1946
Being a nuncio and internuncio in one country. Diplomatic relations between Czechoslovakia and the Vatican from 1939 to 1946

Summary/Abstract: The study addresses the issue of Czechoslovak-Vatican relations, which went through a difficult period from 1939 to 1946, leading to discontinuity, as seen from the perspective of the Czechoslovak political representation. After mutually unfortunate diplomatic developments following 15 March 1939, the Holy See responded to Beneš’s initiative and attempts at rapprochement. The usually well-informed Vatican diplomacy missed the opportunity to start negotiations in the summer of 1944, during the liberation of Italy, and it also underestimated President Beneš’s proverbial intransigence when it insufficiently assessed the content of his memorandum of 1943, which suggested that failure to accept his initiatives would have fatal consequences for future diplomatic relations after the war. After the return of the government in exile from London and Moscow, it was soon clear that the Czechoslovak Republic was more and more under the Soviet influence, but thanks to Beneš’s policy towards the USSR, the country initially had a greater diplomatic freedom than some other countries in Central Europe. There were still unresolved questions between the two parties, primarily the continuity of the pre-war diplomatic relations and re-reception of the nuncio Saverio Ritter in Prague, annulment or termination of recognition of diplomatic relations with the so-called Slovak State during the war, refusal to grant asylum to its representative at the Holy See Karol Sidor, as well as performance of the contractual basis of the modus vivendi with regard to the regulation of powers of Slovak bishops. The study maps in detail the discussions on the nature and level of diplomatic relations. The Holy See sent its representative Raffaele Forni to Prague at the beginning of September 1945, demonstrating the continuity of the diplomatic relations. In Prague, it was virtually impossible to reach a compromise between the conflicting views of the President and members of the government, and to push through a clear opinion concerning their form. At the beginning of 1946, the first post-war diplomat of the Czechoslovak Republic at the Holy See, chargé ďaffaires František Schwarzenberg, was nominated. Prague refused to restore the pre-war diplomatic relations and insisted on a new request for agrément for the pre-war nuncio Ritter to avoid having to recognize his position as the doyen of the diplomatic corps. The Vatican refused this solution and sent him in the lower diplomatic rank of internuncio, for fear that the Czechoslovak Republic might follow the example of Poland and, as a state of the Soviet sphere of interest, might finally reject the diplomatic contact. The long negotiations were concluded in the summer of 1946 by appointing Artur Maixner the ambassador of the Czechoslovak Republic to the Holy See.