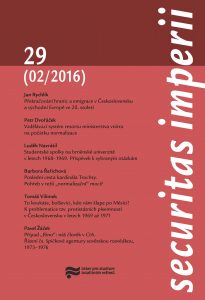 Summary/Abstract: The study describes the possibilities of both legal and illegal emigration from Czechoslovakia and other Eastern European countries in the 20th century, with special focus on the period after the Second World War. With regard to illegal emigration, it also deals with the issue of criminal penalties for illegal border crossing and illegal stay abroad in individual countries. Until the Second World War, opportunities to travel abroad was essentially freely available, and illegal border crossing was considered misdemeanour, which also applied to departure abroad and stay abroad without permission from the authorities. An exception was the USSR, where illegal immigration was considered a criminal offence. After the Second World War, the Soviet model was gradually extended to all the countries of Eastern Europe except Yugoslavia, although penalties for illegal border crossing and illegal stay in a foreign country were not the same everywhere. From 1965, Yugoslavia did not prevent its citizens from travelling to any foreign country, nor from residing there for long periods of time or permanently. As a result of the gradual disintegration of the communist regimes in the late 1980s in Poland, Hungary and later in Bulgaria, freedom of travel and emigration was restored; in other states of the former Soviet bloc and in Albania, this only happened after the collapse of the respective communist regimes.