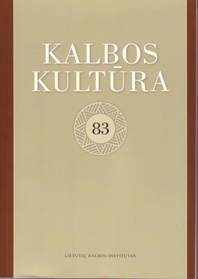 Summary/Abstract: The creator of Standard Lithuanian, Jonas Jablonskis, was also a grammarian who wrote several grammar books that became widely used and that had a major impact on the work of future textbook authors and linguists. The article analyzes one grammatical (syntactical) topic, namely, the treatment of inserts by J. Jablonskis.The study of J. Jablonskis articles revealed several issues. There had been no descriptions of inserts in pre-Jablonskis grammars though some sources had proposed various Lithuanian terms for the insert. These terms, however, were not broadly accepted. Thus the authorship of the term įterpinys should be ascribed to J. Jablonskis who was also the first to define the term and explain the principles of its establishment. His definition includes such features of the insert that do occur in more recent explanations, namely, the absence of grammatical relationto the other words of the sentence, a free placement in the sentence, secondary importance to the basic meaning of the sentence. J. Jablonskis paid little attention to the semantics of inserts and he treated as inserts such constructions that only had a formal intonational and punctuational feature. Some of these aspects gave rise to the tradition of narrow and broad treatment of inserts in the Lithuanian syntax.An interesting yet linguistically unfruitful was J. Jablonskis’ understanding of the insert: he treated inserts as sentences, and a sentence with an insert, in his view, was a complex sentence.