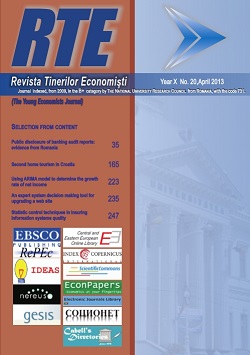 Summary/Abstract: We live in times of crisis, times are characterized by a strong instability which occurs on all levels, not just on the economic plan. Although Romania is not one of the members of the Euro Zone, the single currency there are in our country and is used increasingly more often in transactions, be they commercial or not. Due to the existence of the Euro in the Romanian plan, we wanted to find out what is the perception of the Romanians on the monetary policy of the European Central Bank, especially with regard to the credibility of this policy. To do this we take a poll on the Internet, on a number of 152 people. As a result it resulted that the Romanians have enough confidence in the activities of the European Central Bank.