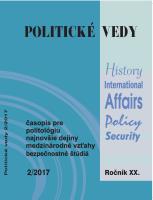 Summary/Abstract: The successor countries of the former Soviet Union are facing many problems in building their national character, respectively, their national identity. One of the important aspects in the construction of national identity is growing, but controversial role of religion and religious institutions in post-Soviet societies. In Belarus and Ukraine independent Autocephalous Orthodox Churches were created, which are independent of the Russian Orthodox Church based in Moscow. Primary objective of the contribution is to offer two variants of functioning of Autocephalous Church as a social force that seeks to shape the Ukrainian and Belarusian identity, but at the same time pulls combat for its existence with other churches. In these countries, the religious affiliation serves as an element of ethnic, political and regional differentiation. Too many churches on their territory mean a variety of particular interests. The part of the article is devoted to the description of coordinates, which shaped the destinies of the Autocephalous Orthodox Churches in the interwar and World War II period too. What was the situation of the Churches in the key periods of formation of national identity in the history? Can they nowadays gain more influence in the minds of the Ukrainian and Belarusian believers? The contribution tries to address these issues too.