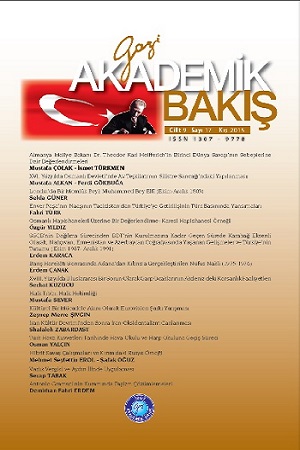 Summary/Abstract: In history mankind has experienced the most devastating experience during the years of the First World War. This pre-war and war in the later stages of a decision taken individually, even thousands, even millions of lives have been directly or indirectly affected. Experiencing the process and outcome of the war rather than the causes of human history has so much more busy. Therefore, the cause of the war which works popularity continues even today. Concerning the reasons for the war period, written by the German Finance Minister Dr. Helfferich especially in England, including working with its allies in the war of public opinion in the state has led to many discussions concerning the reasons. Dr. Helfferich’s “The Beginning of Great War”; “German’s Case in The Supreme Court of Civilization”; was published under the title of The New York Times by the Fatherland company in 1915. Dr. Karl Helfferich’s study has been translated in different languages in following period.