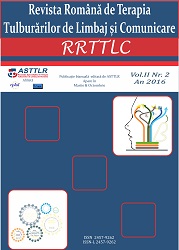 Summary/Abstract: Integration of children with disabilities in mainstream school involves differantial approach and focuses on child` abilities. This means that the therapeutical approach is havily based on a thorough assesment sequence, assesment based on child`s abilities.This article establishes in the first part the theoretical framework for the second part which presents the practical aprroach focused on psychomotor abilities in children with intellectual disabilities. The main psychomotor abilities, the basic concepts- body scheme, lateralisation, perception of time and space were assessed in order to be able to establish the future therapeutical coordinates of the intervention plan. The assesment procedure, as practical aspect was reinforced by the set of practical exercices throgh which the aim was that to ensure enriching children with new abilities. A case study was presented in order to particularize both the assessment procedure, as well as the intervention approach, so that this case study can be considered an example of a model of good practices in the field of intellectual disabilities.