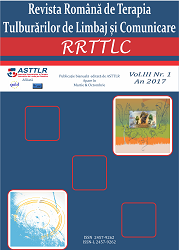 Summary/Abstract: In this paper we will try to make a comparative analysis concerning the sound systems of French and English language. In the first section, a short definition of language as means of communication is given and the development of foreign languages is approached. The next two sections treat some aspects of teaching foreign languages to visually impaired children, and difficulties children may have during learning. In the fourth section the main problem of the article, namely the comparative analysis between French and English sounds is brought into light with educational implications, respectively in teaching foreign languages. The aim of the last section is that of giving some conclusions about the study.