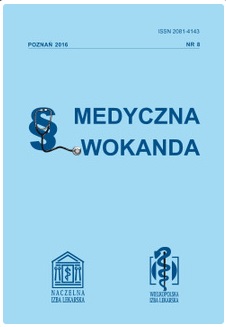 Orzekanie o pozbawieniu prawa wykonywania zawodu przez sądy lekarskie. Część I
Deprivation of the right to practice in the decisions of the medical courts. Part I

Summary/Abstract: The problem of the imposition by the medical courts of the punishment of deprivation ofthe right to practice medicine, discussed in this article, is extremely interesting for several reasons. In contrast to the criminal provisions, which must describe the offence in the most accurate way possible (nullum crimen sine lege certa), guaranteeing protection of the individual against the arbitrary use of criminal repression by the state authorities, the rules of professional responsibility do not include a catalogue of professional offences. From the perspective of professional responsibility it is crucial to determine whether the offender has violated rules – applicable to him/her – related to the practice of the profession and following from the principles of medical ethics, legal provisions relating to the exercise of the medical profession, the principles expressed in the resolutions of the medical council, decisions of the medical courts, or good customs accepted by the medical community. Unlike criminal law,which for each offence determines precisely the type of punishment and its lower and upperlimits (nulla poena sine lege), both Acts on Medical Chambers contain only catalogues of penalties that medical courts can impose. More importantly, the penalty of deprivation of theright to practice ordered by the medical court is more severe than the longest prohibition to practice the profession decided on the basis of criminal law. In addition, such deprivation is practically synonymous with the ‘professional death’ of a doctor. In the context of the above,the authors deemed it worthwhile to analyse all cases in which the medical courts chose to impose the penalty of deprivation of the right to practice medicine, to find answers to questions of how many such rulings were passed during the operation of the medical chambers since the commencement of operations in 1990, and what professional offences the punished doctors committed. Moreover, an attempt was made to verify the correctness of the course of individual proceedings for professional liability of doctors in accordance with the law applicable during that period. The study covered the materials provided by the Chief Commissioner of Professional Responsibility. The analysis was divided into two parts: the first focuses on a discussion of the first five proceedings for professional liability in which final decisions were taken withdrawing the medical licence to practice, conducted in the years1990–2009 on the basis of the Act of 17 May 1989 on Medical Chambers and the second – other procedures that took place after 1 January 2010 on the basis of the Act of 2 December2009 on Medical Chambers.