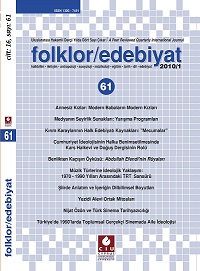 Summary/Abstract: People’s Houses were founded during the years when the governing elites of the Republic reconstructed the nation in accordance with the principles of Kemalism. The trial of Serbest Fırka in 1930s proved to the governing elites that the reforms consecutively brought up after 1923 were not actually adopted by the society. People’s Houses started their action in the cities they were founded and in their surroundings by giving importance to the education of the adults in order to make up for this deficiency. People’s Houses of Kars and its periodical Doğuş proved to be one of the most effective instruments in Kars and its surroundings explaining the ideology of revolution, namely the principles of Kemalism to the society and getting the society accept them.