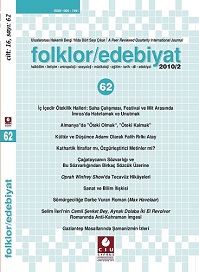 Summary/Abstract: “Bohemian”, in its origin, is a name given to those who live in a region within the borders of Chech Republic and the “gypsies” in the Western Europe; but in due course it has turned into a term which is used to describe a lifestyle that is observed in the artistic world. In this study, Bohemian lifestyle centered in Paris in the 19th and 20th century has been addressed. “Bir Tereddüdün Romanı”, which is appraised as the reflection of the so called lifestyle, matters in terms of depicting the place of the Bohemian in the Turkish society and giving details about the life of Peyami Safa. In this regard, the novel is appraised in terms of “bohemian” concept.