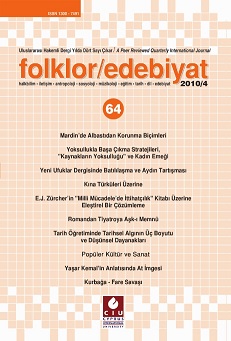 Summary/Abstract: With Malazgirt Victory in 1071 Turks migration began to Anatolia and Islam had found a new expansion field in the hands of Turks and spreading of Islam in Anatolia had accelerated in the period of Principalities and especially Seljuks, Anatolian Seljuks. But in the 13.centuries Mongolian influence which occurred in Central Asia and then affected to Anatolia, led to people different searches. Mongolians had vandalized where they gone through, therefore; a completely crisis period had began to in Anatolia. Especially in this period most of dervishes who got of Yesevi doctrines had immigrated to Anatolia and began to tell Islam with different ways to the people. This saints who came from Central Asia, dwelled upon to doctrines and emphasized that Islam is not a fear religion it is a love religion,and to fall for love to God rather than fear of God. In this way; this Yesevi dervishes who came from Central Asia, helped to people who fallen into crisis process and easily overcome from this process, also they exposed excellent and experienced human type with the help of advice which they gave to people in their works. In this study, in the century of 13 Religious-Sufism Folk Poetry ethical components were exposed and three great poets were examined who lived in the century of 13, such as Hacı Bektaş-ı Veli, Yunus Emre, Said Emre and also, common components which related with the ethical understandings were classified and commented on finding discoveries.