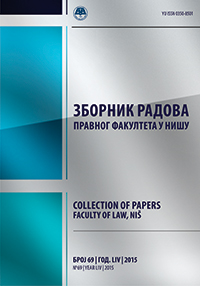 Summary/Abstract: Peaceful future based on common values, as a motive for the integration of the peoples of Europe, implies discontinuity with value-concepts that were the cause of conflicts. When the European Union and its member states ignore the promotion of the Ustasha’s ideological concept which caused great evil to Serbia, as a neighboring country and a candidate for EU membership, the doubt arises whether the current value concept contains elements of challenge for the candidate’s national security. In this article, we assume that the historical legacy of Nazism has influenced the shaping of European values. The analysis starts from the Nazi views embodied in the root of the interest for unity of Europe, and the factors of influence of the Nazi value order after World War II. The idea of unified Europe can be attributed to Nazis, who had territorial ambitions in terms of Europe as the living space of the Germanic race, under the dominance of Germany. During the war, there was a significant level of collaboration in European states, while Nazis basically aimed to annihilate Jews, Slavs and Gypsies. After the war, anti-Nazism was marginalized, due to the Cold War against communism and the Soviet Union. The identified trends are analyzed in the context of shaping the value system at the time of neo-liberalism and globalization. After the undermining of the international financial system in 1971, and the rise of neo-liberalism, globalization has generated a trend of centralization and financial domination. This is accompanied by neo-conservative doctrine and politics, which promote realism in international relations, and “desovereignization” of nation states. The example of the coup d’état and civil conflict in Ukraine exposed tolerance for ultra-nationalistic and neo-Nazi ideas. We find that elitism and imperialism remain as value similarities between the Nazi and the current neo-liberal European value discourse, and that there is an essentially identical interest in the unification of Europe. The trends are contextualized in light of the challenges concerning the common European values in the integration process of the Republic of Serbia. Today, the EU incorporates neo-Nazi political forces within its institutions. Having in mind the attitude of Nazism towards non-Germanic nations, tolerance for resembling value concepts in Croatia and other EU states, and imposition of the ambivalence towards them in the process of accession, generates challenge for vital values of the state and people as a whole in Serbia and other EU candidates. Thus, we conclude that there is a justified reason for concern in regard to the requirements which Serbia will be demanded to meet, either formally or informally, by the EU institutions in the process of admission.