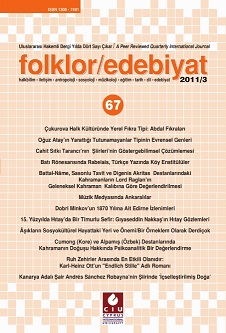 Summary/Abstract: Rabelais’s novel is the most important mile stones of the European Renaissance. Rabelais opened a new door into the field of literature. Cervantes, Shakespeare and Goethe passed from this door and a great conversion and transformation period into the historical process started in Europe which intend to shake the world as the re-emergence area. According to Mihail Bahtin who has detailed studies on Renaissance, the basic feature of this conversion is Rabelais’s multi sign system originating from humour of grotesk folk culture. This system transfered to literary world and improved against language and perception system which has only one declarative language and based on fear. The foundation of Turkish Republic is defined as a cultural revolution by a lot of thinkers. After the Turkish Republic, one of the most important conversions in new Turkish cultural enviroment is the elements of grotesk folk culture which were transfered by authors graduated from village institute slightingly. There are some important parallels and identities between Rabelais’s novel and the works of authors graduated from village institute. Rabelais’s novel was not understood by Enlightement Movement and Romanticism which was born as reaction against Enlightement Movement and tried to trivialized. The works belonging to authors graduated from village institute vilified with “Village Novel” label and was excluded from cultural pradigma. This case generates a similar tableau between Rabelais’s novel and the works of authors graduated from village institute.