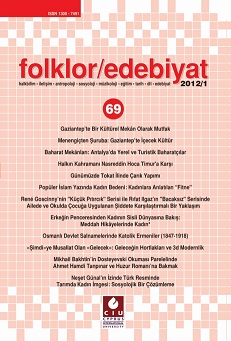 Summary/Abstract: No matter how the potential to determine one’s own life story has been exalted until recently, the modern humanis looking for place(s), to hand ower this potential (freedom!), precisely in terms of consequences of determination potential in question. Responsibilities, the person aspired in the name of being an individual, has increased so much that being an “individual” has been referred to an intolerable state of humanity more often. Dealing with both this human condition conceptualized also as “ The new individualism”, and present-day conditions of modernity, in this study, unlike the built-in patterns of thinking, a “present”, shaped mostly by “future” than by the “past” will be tried to be depicted. Here, due to as a form of perception, distorting,/overturning effects of “future” over “present” will be focused on, the theory of risk society will be utilized. Moreover, because the effect of the “future” over the “present” will be explained metaphorically from the “pestering”, the case screwing up the “present” that will be offer in the form of the spook of the future and present conditions of modernity that thoughts are formed ara conceptualized in the form 3D modernity. The scope of this study the conceptualization of the 3D modernity, within the triology of “past”, “present” and “future”, has been used to provide the determining effects over “present” of a “future” perception/anxiety neraly heading towards a standard in the societies that modernity generilized to be more dminant. 3D modernity with this form implies a “present” that the spooks of the future has pestered. There was expectation(s) firstly fort he human on the threshold of the modernity. At any price the modern human run very quickly to realize those expectations furiously. So his expectations, desires and maybe joy of living stayed behind of him. Third dimension in here has been used to conceptualize an advanced modernity case pestering “present” (enabling a risk society).