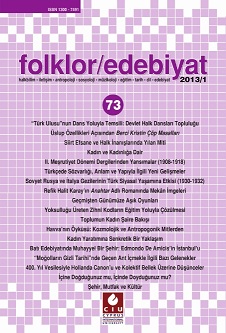 Summary/Abstract: Throughout history, “the oath swearing” has been a matter of great importance for honesty and reliability between citizens or states. The oath swearing tradition of Central Asian peoples has descended to us, with some modifications, as a cultural element of the Huns. These oath taking ceremonies were being held in the presence of representatives from both sides between individuals and between states in a spectacular way. There are several articles on this practice among Turkish peoples. Though here we attempted to show the amount of interaction considering oath swearing between Turks and Mongols, not much has been done on this topic regarding Mongol peoples. The oath swearing tradition of nomadic states like Hun, Kök Türk, Uygur and Kitan developed into a special ceremony in 13th century. During this time, it was of prime importance in defining the relations between friends or states. This practice which is attested in all Central Asian peoples has had a profound effect on Mongol culture. The word “ant içme” which has been used in Turkish literature since long time ago, is also seen in some Mongolian texts. Comparing these instances with those from Turkish language, one might say that although they are dated to much later times, still they show how effective this practice was in political life of Mongols. There exists information about oath making in “The Secret History of the Mongols” as a basic resource of thirteenth century Mongolian language. Focusing especially on this resource, this article intends to call attentions to the similarities between Turks and Mongols in practicing an oath.