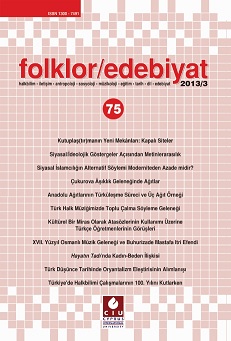 Summary/Abstract: When we look at the prevailing retoric of fundamentalist islamic ideologies and political islam, the argument that islam is not a religion which only regulates single muslim subject’s life but has a total claim to regulate whole (e.g. political, economic and legal) area of social life. The reinterpretation and rebuilding of İslam in modern period make it not only a religion but also an ideology. The intellectuel actors of islamic ideology treat this ideology, which is called as political islam, as a holist, universal, trans-historical and esseantialist system. According to this lineer, progressive, secular or semi-secular understanding, İslam is a religion which will create in the future a civilisation born out of its fundamental roots; moreover, it is totally different from modernity and capitalism and the only alternative system to them. The opposite arguments suggest that political İslam is a product of specific historical conditions and processes, and it is a opposition within the system just like other intra-system socio-political movements. Thus, while the retoric of political İslam and islamic movements transform themselves according to their own historical, social and conjunctural conditions, they become important instruments for reproducing and retrasforming the existing system in itself. This study examines the arguments mentioned above in the context of the relationship of political İslam and modernity and the conditions in which islamic movements and political İslam have emerged and transformed itself.