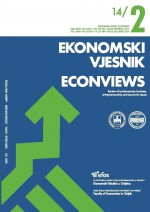 Summary/Abstract: Although eastern Croatia, due to its natural resources and very good geographic location, used to be industrially highly developed, nowadays it is one of the least developed regions in the Republic of Croatia. Driven by a war situation, the disappearance of traditional industries (textile industry, furniture, food processing, metal working) contributed to weak development. With market opening and disappearance of labour-intensive industries, the need for change in thinking became obvious, together with education and encouraging of self-employment. Rapid development of ICT in the world on the one hand and the involvement of numerous highly educated and enthusiastic IT experts on the other has increased the development of IT industry in Osijek. This is an industry where market has no limits, entry costs are low and revenues are relatively high. Since numerous IT start-ups were founded in the area of Osijek, several people, mostly owners of those enterprises, decided in 2012 to initiate the project named Osijek Software City (later abbreviated to OSC). In this paper, the case study of OSC will be shown in detail, as well as its influence on the region’s competitiveness. The key point of OSC initiative is employment of IT related and educated young people since there is a deficit of quality staff in the regional IT industry. For the purpose of this paper, the interview with the OSC Association secretary has been conducted, which showcases their achievements from the initial stages to the present. In addition, future trends of local IT industry will be assessed.