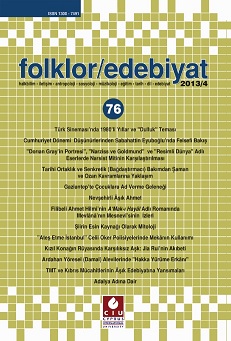 Summary/Abstract: The “Dream of Red Chambers” also known with its original name “Hong Lou Meng” has a unique place in Chinese history of literature. Along with the “Journey to the West”, “Outlaws of the Marsh” and the “Romance of the Three Kingdoms”, “Dream of Red Chambers” belongs to the very well known “four classical novels” in China. Among them, the “Dream of Red Chambers” occupies the highest place in terms of subject matter, style and richness of its language use. The most subtle and exhaustive depictions of traditional Chinese society also can be seen in this voluminous work. Social relations, ceremonies, etiquette, education, love and sex are among the prominent themes in the novel. Especially the relations between women and men displayed very complex features throughout the book. The women are depicted in detail for their beauty and manner and for the roles they played. Lady Feng (Anka) is one of those women who took part in such complex relations. She is also an outstanding figure among the woman characters and in a narrow sense, she displays an example for the “chaste women” of the gentry. In the 11th chapter, a coincidental encounter between her and Jia Rui brings about a story subtly criticizing some traditional values and morality of the 18th century in China. On the other hand, Jia Rui is a youngster who is short in such moral ambitions and has a strong sexual desire for her. In the end, his untamed desire led him to his collapse. The chapter concluded with a passage relating his hallucinative plight as a reflection of earlier events.