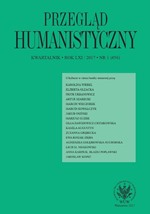 Summary/Abstract: The article discusses the way of functioning of an atomic bomb in Jacek Dukaj’s works.A lot of attention is particularly paid to the analysis of the functions the A-bomb fulfils in thiswriter’s contemporary novel – Xavras Wyżryn. It is indicated that Dukaj used mainly symbolicpower of atomic weapons in this work. The system of negative associations and emotionsrelating to these weapons clashed with the Polish messianic tradition of struggle for independence,which served as a basis for reflection on the issue of terrorism. In Dukaj’s novel,an atomic bomb is not the part of a coherent futurological vision or the basis for a deeperreflection concerning the civilization threats. In the writer’s later works, in which thereflection is clearly present, nuclear weapons no longer play a significant role. The threatspresented are of different nature: they are connected with genetic, memetic or ecologicalexperiments. The example of Dukaj’s works – the way in which the atomic weapons arepresent and absent in it – is a starting point for a hypothesis on the reduced attractivenessof nuclear weapons as a motif of the fantasy literature. Although they still carry a hugeemotional load, at present the civilization concerns, which expressed themselves as the fearof nuclear weapons – e.g. the fear of excessive power of the mankind, the fear of selfdestructionor the changes taking place in the human species, to a great extent have shiftedelsewhere.