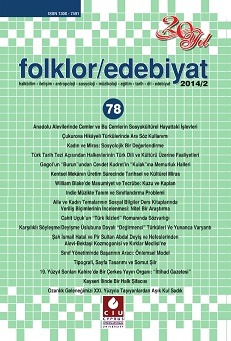 Summary/Abstract: Anatolian Alevism’s beliefs, its philosophy, its life style and its worldview is hidden in “cem”s. Cem is a rite which is effected by all aspirants without sexism before a “dede” or a “pir” which means spiritual guides. This kind rite and rituals which is made in the religious ceremony is a main way of the cult of Alevis. And Alevism’s rules are emphasized at the “Buyruk” which is their holy book. “Dede”s pass on doctrines which is at holy book to the aspirants as an amenability. They are religion leader which has an active part to pass on Alevism’s own beliefs and doctrines to the aspirants as orally in cem. Manifold views have been broached who they are in studies which made about Alevism heretofore. According to this, some researchers call Alevism as a culture, someones call it as a way of the life and its philosophy and the other ones call it as a belief. In this context, it will be helpful to make known what Anatolian Alevism is and its doctrines are. Also it will be helpful to approach to detect its structure of belief. In this article, firstly, it has been accentuated what meaning of “cem” and then it has been mentioned that the meaning attributed to the cem in Anatolian Alevis. In another step, it has been introduced cem’s which is collected below ten titles as content and it has been mentioned that role of cems in socio-cultural life. As a final, it has been ascertained that cems are so effective to pass on their own beliefs to the people and to practice their own beliefs in the community life. Also, it has been noted that cems are so very functional to strengthen to sense of unity as harmony between individual with society.