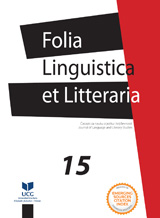 Summary/Abstract: In her debut novel in English, Turkish author Elif Shafak investigates the lives of three foreign students in Boston in order to explore the notions of community and alienation while tackling issues about language, religion, and culture. This paper focuses on the themes of migration, expatriation and "trans-culturalism" while it cross-examines and challenges the established boundaries of "home," "nation" and "identity." The Saint of Incipient Insanities develops around the relations of a group of international students in Boston, particularly the relationship between Ömer, a graduate student from Turkey, and Gail, his eccentric, manic-depressive American girlfriend with Jewish roots, who later becomes his wife but commits suicide by jumping from the Bosphorus Bridge, which she describes as the "the perfect place of inbetweendom." In her novel, Elif Shafak explores migrant groups’ or individuals’ processes of coming to terms with their "new homes" and its marks upon their identity through their multicultural experiences and interactions. Thus, this paper will look at the ways in which the novel puts on show the variety and adaptability of identity, whose conception as such challenges monolithic, essentialist and totalizing discourses of home and identity in the context of nation, race and ethnicity. Like most of her characters in The Saint of Incipient Insanities, Shafak is a foreigner, not only to America where she teaches at the University of Arizona, but also to her native Turkey. Having grown up most of her life in Western Europe, she is innately coordinated to the notion of names, nationality, and racism – elements that are tied together under "identity," which she believes "sets barricades among humanity, dividing us into different flocks and sub-flocks."