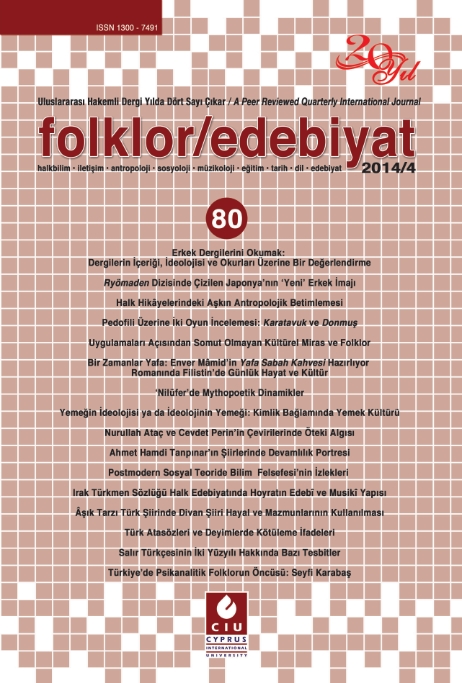 Yemeğin İdeolojisi Ya Da İdeolojinin Yemeği : Kimlik Bağlamında Yemek Kültürü
The Ideology of Food or the Food of Ideology: Food Culture in Terms of Identity

Summary/Abstract: This study focuses on the ideology of food and food culture which has formed an expanding cultural environment in recent years. The food of ideology refers to the food culture which is shaped by values, attitudes and points of view determining our behaviors. The former points to the consumption society, while the latter refers to the field of cultural reproduction which is the main topic of this paper. It can be said that there is a complex but reciprocally affirmative relationship between the ideology and the identity. This relationship which relies on references like belonging and legitimacy is always rebuilt considerably historically and spatially. In these rebuilding processes, semiological meanings of eating and food cultures are employed widely. In this framework, this paper deals with how identity categories such as religious beliefs, nationality, class, nationalism and ethnicity shape food culture. Consequently, all traditional and modern forms of eating practices have explicit or implicit meanings. The ideological attitude of a society has a determining role in forming of these meanings. Survival strategies of religious, ethnic, sexual, national and all kinds of identities have a political character, too. Food cultures also locate themselves according to these fields of struggle, and moreover they can be the means of struggle themselves.