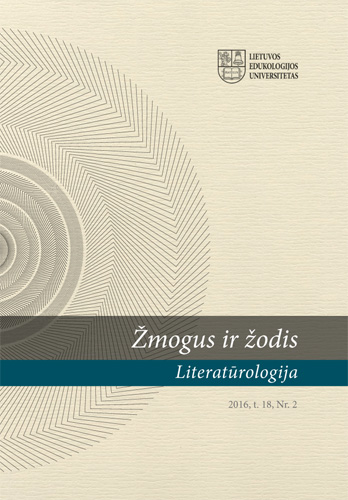 Summary/Abstract: The article focuses on indirect and complicated connections of Balys Sruoga’s personal attitudes and his works with the main philosophic trend of the 20th century, namely the idea of individual’s unconditioned value and issues of rebellion, anxiety, as well as temporality and purport of life, elaborated by modernist art movements (Symbolism, Impressionism and Neo-romanticism) and highlighted by Existentialism. It searches not for Sruoga’s reply to philosophical postulates or paraphrases of an important thesis, but rather for author’s authentic attitude within the context of this paradigm. Research is focused on the significance of Jurgis Baltrušaitis, a Lithuanian diplomat and poet, as well as Russian symbolist, for Sruoga. It also highlights the role of the Teacher of the younger generation, assumed by Sruoga during the Nazi occupation. In doing so, the following works are analysed: early poetry, novel, Dievų miškas (The Forest of the Gods), and drama, Pajūrio kurortas (The Resort at the Seaside). The theoretical approach to the above mentioned texts consists of the history of the 20th century ideas, the context of modern literature and trends in philosophy, Enterbter Geist (The Disinherited Mind) by Erich Heller that offered a look at the 19th century and the continuity of its thinking traditions in the 20th century, as well as the concept of the literary field proposed by Dominique Maingueneau.