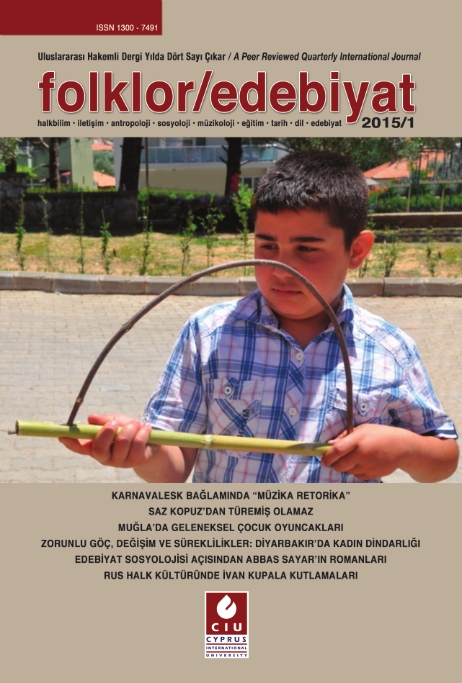 Summary/Abstract: Although a lot of research has been done on the concept, the “civilization”, “urban” in lexicon, can not have an absolute conclusion that has been reached regarding its use. While some researchers view that the concepts of civilization and culture its equivalent some of others differentiate these concepts from each other. Definitely, there is a close relationship between civilization and culture. The pretiminary condition to cite a likely formation of a civilization is to have an extent of cultural accumulation. The literature is a form of art in which the cultural values of civilizations are described through language. It is likely to find the reflection of the cultural element, at the master of arts such as sculpture, music, architecture, furniture, food, weapons and so on. All these cultural elements of the work reflected by the work display the reality and the richness of life as well as civilization to the reader. Civilizations consist of material and spiritual elements which are interconnected to each other, and these elements show progress throughout the history. The works of literature are a reflector of the circumstances in which their own civilization was formed and also the witness of the time. It could be possible to see some trace, in each author’s time. However, this does not mean that his ideas belong only to his era. The authoruses the past, with all its glorious accumulation, and the future with its unknown world, as a tool. Literature, is a way go art to enrich all of these elements of culture and civilization. There are times when civilizations have disappeared. In such a case with the material and spiritual indicators, it is possible to find out specific features of lost civilizations. In this work Istanbul, as an important material indicator of civilization, has been selected for the place. Istanbul, due to its favorable geographic location and its private community, has been home to many civilizations as the capital town, even played a role in the formation of the historic ages. In a paralel way to these, it has a very high material culture. In these tudy, first, the meanings attributed to the concept of civilization, will be discussed. With the conclusions, the indicators of forming civilization will be determined. Then, some further information as for which indicators are to be provided among those in the work, looked through subsequently, will be presented. And, the functions of the indicators in the editing of the work will be touched upon.