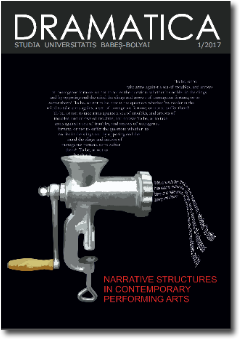 Summary/Abstract: The paper’s aim is to offer an overview on a diverse and dynamic phenomenon, as documentary theatre in Britain, with accents on two of the most visible directions, that it follows on the last decades: verbatim and tribunal theatre. Since the mid ‘90s, a period dominated by apathy and detachment, these formulas have been proving their efficiency, on the one hand, by investigating and researching some current, urgent, national and international topics, and on the other hand by calling new strategies for addressing and engaging the audience. Meanwhile these practices based on ”the truth” that comes from documents and interviews generate particular questions about the relationship between ethic and esthetic, between objective and subjective, between real and fictional. Documentary theatre, and particularly verbatim theatre deals with a dilemma: how to create a theatrical viable experience, without distorting the documentary source?