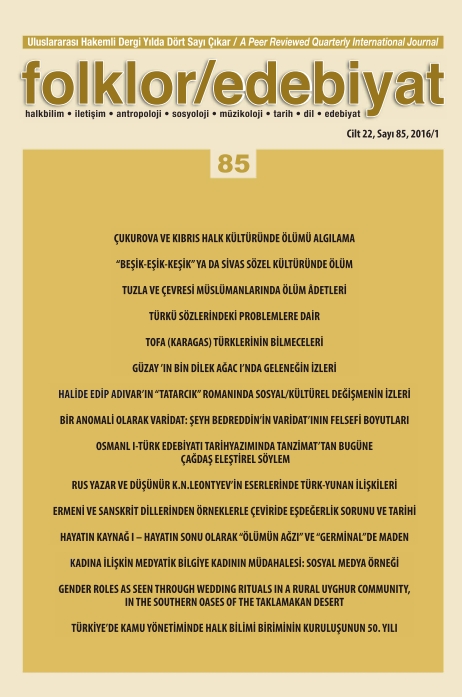 Summary/Abstract: A manifold of studies in various disciplines have been carried out upon the concept of death, which is the inevitable and mutual fate of all living beings. It can be said that the historical trajectory of studies that seek to understand and explain the psychological reality of death is quite new, even though the phenomenon frequently concerned different fields such as religion, philosophy, art, literature, medicine, biology and law. It is observed that psychological studies concerning death started to attract Western psychologists with the beginning of 20th century, and these studies (thanatology researches) gained momentum since then, getting even more intense by mid-1950s Regardless of the level of development and together with the verbal culture, all societies bear a certain oral culture that is inevitably significant for socio-cultural integration, in the sense that “in the oral culture, the ground of knowledge is human memory”, offering an undeniable prosperity. The concept of death prevails quite commonly in the traditional oral culture of Anatolia as well, with its temporal aspects such as the before, the after and the moment of death. Having a connection with religion and faith, this commonality should also be thought of in relation to further cultural aspects such as respect for the dead, the attitude towards the event of death and the rich cultural history behind. This study will be concerned with unraveling the concept of death within the context of Sivas and through the elements of oral culture and tradition, together with its resonation in faith, social life and societal behavior.