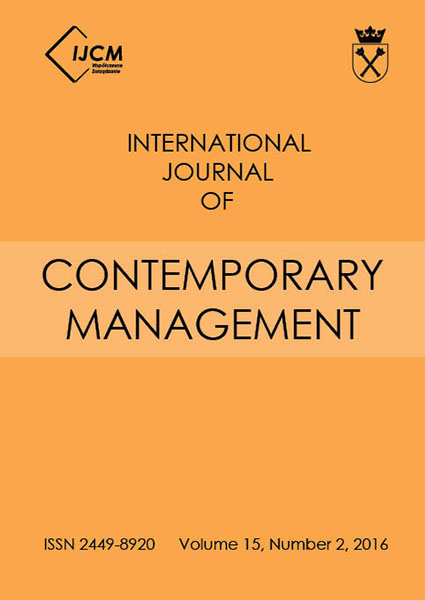 Summary/Abstract: Background. The problems of open innovation and crowdsourcing are more and more often present in literature on management sciences. It is emphasized that during creation of innovation a given organisation should make use of the knowledge existing outside of it. Moreover, it is suggested that the process of creating and developing products or services should be open. By the same, organisations should make use of the knowledge that is being possessed by a generally understood public or crowd (Wexler, 2011). The crowd has gained a new meaning: from unorganised, chaotic and often aggressive people it has become organised and oriented towards problem solving, and in particular creating the so-called open innovations. However, despite the increase of researchers’ interest in the subject of open innovation or crowdsourcing and awareness of “crowd wisdom”, it is difficult to find in the literature unambiguous answers to the question on what is crowd capital. Many authors assume that crowd capital is the core of both open innovation and crowdsourcing.Research aims. The aim of the article is integration and synthesis of the existing scientific output related to crowd capital and presenting an original conceptualisation of this notion.Methodology. In order to identify the main research perspectives and develop a proposal of the conceptualisation, the method of systematic literature review was used, including an analysis of the number of citations. This enabled revealing the existing research axes and the cognitive structure emerging from works published so far. Publications entered in full text databases were analysed. The research covered a period of 9 years: from 2007 to 2016.Key findings. The review and analysis of the contents of publications listed within the systematic literature review enabled identifying of the directions of further scientific research. The systematic foreign and domestic literature review published until 2016 indicated that many levels and areas of the occurrence of the subject phenomenon have still not been examined, which shows free space for new research in this scope. The article presents a proposal of an original conceptualisation of the notion of crowd capital.