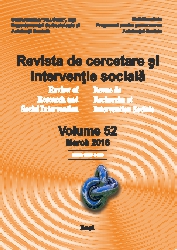 Summary/Abstract: Corruption is a phenomenon of which appears in all forms of government. Moreover, one can easily say that it occurs in all spheres of society. According to the Global Corruption Barometer from 2013 (a survey in 107 countries to determine how widespread is corruption) one in two persons believes that, in terms of corruption, in the last two years the situation has worsened. But what interests us particularly is that corruption in government’s activity leads to: loss of resources, the economic downturn, low quality of life, undermining of the government’s credibility and the reduction of its effectiveness. Therefore, taking into account all these aspects, we consider it appropriate for our scientific approach to identify the position that the Supreme Audit Institutions have as far as corruption is concerned. The main objective of our study is to identify the role of the Supreme Audit Institutions in fighting corruption, because the issue of corruption has social features, it is not new and also controversial and up-to-date, thanks to major implications involved. We found that if the Supreme Audit Institution is organized as a Court, the country is more likely to have higher levels of corruption than if opposite.