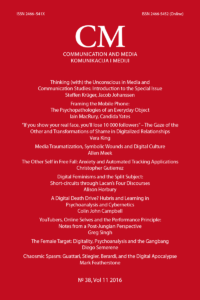 Summary/Abstract: Do media images really traumatize the public? If they do not, then why do so many commentators - from those commemorating the Holocaust to those analysing the impact of 9/11 - claim that trauma can be transmitted to specific ethnic groups or entire societies? While these claims can be based on empirical data or used to justify political agendas, psychoanalysis also continues to influence conceptions of collective trauma and to offer important perspectives for evaluating these conceptions. This paper explores these questions of mediated trauma and collective identity by tracing a neglected historical trajectory back to the work of psychoanalyst and anthropologist Geza Roheim. Roheim produced studies of Australian Aboriginal culture that applied the theory of collective trauma outlined in Freud's Totem and Taboo. He also produced an ethnographic film, Subincision, documenting an initiation rite, that was subsequently used in psychological studies of so-called 'stress films'. Putting aside Roheim's psychoanalytic interpretations of indigenous culture, psychologists used his film to measure the impact of images of violence and pain. These studies from the 1960s have recently been rediscovered by scholars of Holocaust film and video testimony. This paper seeks to recover the concept of 'symbolic wounds' developed in psychoanalyst Bruno Bettelheim's later commentary on Roheim's work. The mass media of newspapers, film and television have supported the idea of cultural trauma shared by large societies. The concept of symbolic wounds that enhance group membership and mobilize collective action may be more useful for understanding how violent and shocking images are put to more diverse uses in digital culture.