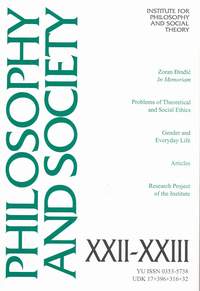 Summary/Abstract: The main cause of Schmitt’s and Kojève’s friendship, and consequently, their correspondence, lies in their common affinity for philosophy of Hegel. When they began corresponding in 1955, Schmitt was something of an academic pariah; in 1933, the legal scholar had joined the Nazi Party, publicly declared his anti-Semitism, was later in terrogated (but not charged) at Nuremberg, and retired from his post at the University of Berlin in 1946. After his famous lectures on Hegel’s Phenomenology ended in 1939, Kojève joined the Resistance. At the end of the World II War, he wound up in the French ministry of economic affairs, where he worked until his death in 1968. This text is written on the margins of two letters, one written on 14.XII.1955. by Schmitt and the other, Kojève’s answer, dated on 4.I.1956. The subject of those two letters is the interpretation of the enemy in philosophy of Hegel.