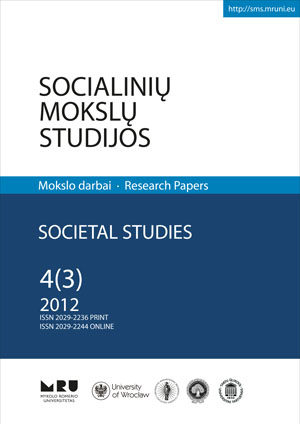 Summary/Abstract: When Constitutional Court of the Republic of Lithuania in its 28 November 2011 decision of 28 November 2011 admitted that constitutional protection is not limited to a matrimonial family, but covers „another forms of family“, the discussion was triggered: does the Constitution legalize „other forms of family“ and should these „other forms of family“ be deemed as legal ones, or even more, as constitutional categories? Since the Constitution recognizes family as the basis of the state and of society, the notion of a family should be reserved to covering only those interpersonal relations which are capable to ensure physical continuity of a society and in the same time are legal (i.e. have official public registration). This alone is a sufficient reason to state that relations of persons of the same gender couldn’t be deemed as family in so far as these are non-productive relations in the terms of the continuity of the society. Non-productivity cannot be the basis for continuity of a living society. For a partnership to be deemed as a family and to have an independent, alongside family legal basis it should preserve some features attributive to a family: it should ensure physical continuity of a society (heterogeneity) and hold formal nature as a legal relationship (the requirement of registration in accordance to procedures established by law). Since a partnership meets these requirements, the meaning of it becomes similar to matrimony not only in its substance, but in its legal form as well. The introduction of the notion of “partnership” would be just another useless multiplication of essences and thus subject to elimination from the legal system in accordance to W. Ockham’s “razor’s principle”. Though relations of cohabitants are capable to ensure physical continuity of a society, they are not legal relations since they lack external formality, which is necessary for the state and other third parties to recognize the existence of such relations as well as the moment of their actualization, the moment from which the state’s obligation to protect and care for such relations begins. The relations of cohabitants are purely personal; they are not subject to states regulation. The parties of such relations consciously relieve the state of obligation to recognize and protect their relations by renouncing their obligation to register their relations. The equation of „other forms of family“ to matrimonial family in terms of consequences makes matrimony unnecessary and proclaims “death sentence” for it: if the same legal consequences could be reached by using “other forms of family” why should one use matrimonial family as it is a more complicated device. Recognition of a family as the basis of the state and of society brings it among fundamental Constitutional notions. Thus its content shall be determined not by interpretations of Constitutional Court, but by the statutory text, which is deliberated by the highest state’s authority institution (Parl