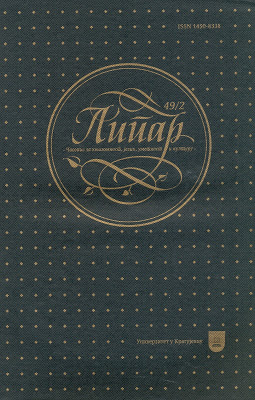 Summary/Abstract: The present paper strives to analyse the works and ideas of three authors F. M. Dostoevsky („Legend of the Grand Inquisitor“), Simone Weil (The Need for Roots), and Stojan Steve Tesich (On the open road) in the light of their struggle for reviving man’s primordial forms of conscience and consciousness which will help humanity regain ability to resist religious and ethical mutations of the present era. These authors believe that the official religious institutions of Christian church, having cast away Christ’s gospel of brotherly love, have sided with “Him”, (as voiced and testified by Dostoevsky’s Grand Inquisitor) the Satan himself, who tempted Christ in the desert by offering him rule over “kingdom of earth” in exchange for Christ’s submission. Scientific humanism coupled with Christianity’s betrayal of eternal values posited by Christ has stripped man naked of the religious context which gave his life meaning, leaving him/her free falling in the abyss of nihilism. Weil suggests, which is one of her major ideas in The need for Roots, that the cure to the moral plight of modern European humanity resides in its ability to bring back “the spirit of truth”, love and grace into modern Christianity, which is in its present state devoid of these evangelical virtues. Weil and Dostoevsky’s ideas are shared by Steve Tesich, a Serbian-American screenwriter, playwright and novelist, whose play On the open road is based on Dostoevsky’s „Legend of the Grand Inquisitor“.