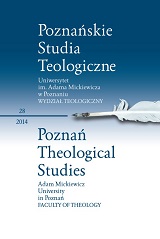 Summary/Abstract: This article concerns biblical royal summaries, that is, the corpus of concise notes concerning the rulers of Israel and Judah as preserved in the Books of Kings. The fundamental question of this study concerns the supposed existence and character of the hypothetical court chronicles (sper dibrê hayymîm) of the Israelite and Judahite monarchs who are regularly mentioned by the biblical authors as the main point of reference for the royal summaries (the well-known question: “the rest of the acts of king x, and all that he did, are they not written in the book of the chronicles of the kings of Judah / Israel?”). However, it is unclear whether these references should be interpreted as stemming from authentic sources or as examples of pseudoepigrapha. ny decision in this area of research is significant to studies on the provenance and redaction of Kings or controversies concerning the historical reliability of the references. Presenting the arguments for the existence of an archival collection which could have been used by the biblical compilers may be a constructive counterweight to the widely accepted hypothesis that the biblical royal summaries are the mere product of the biblical author’s imagination.