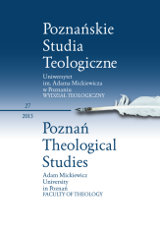 Summary/Abstract: On September 27, 1297 Pope Boniface VIII (1294-1303) promulgated a bull beginning with the words Detestande feritatis, thereby outlawing any further practice of the medieval custom of dismembering human corpses which were subsequently boiled in water to separate the bones from the soft tissue. This was a practice that facilitated burial in places remote from the scene of death of the deceased. The first part of the article presents the circumstances in which the papal document originated. By outlawing such practices the Pope invalidated the decisions contained in the last Wills of some, especially the French, cardinals of his times. The custom of dismembering human corpses was predominantly practiced north of the Alps, but it was also present on the territory of today’s Spain. In medieval times it was known as “the German custom” (mos teutonicus) and was under piimed by a specific medieval anthropology. The second part of the article scrutinizes the probable reasons of the Pope’s violent reaction. An attempt is made to reconstruct the forma mentis of Boniface VIII. Relevant indications and clues can be found in the records of the proceedings against the Pope by Philip the Fair, king of France, in the iconography of monuments erected at the Pope’s initiative, and also in the development of the natural sciences in the late Middle Ages.