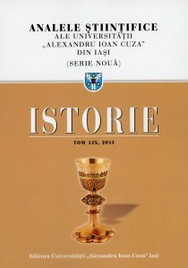 Summary/Abstract: In order to put the radio under the subordination of Antonescu government and to give it a controlled and efficient activity in what regards the propaganda broadcasted in the country and abroad, the program on Radio Romania was restructured and the conferences were reorganized by forming some series of organic casts on history, literature, philosophy, applied sciences, travel descriptions ecc. These series were scheduled at certain hours so that the listeners could easily identify them. In organizing these casts were involved the best professionals of the time. Among the historians of those times there were Gheorghe I. Brătianu, Constantin C. Giurescu, Silviu Dragomir, Theodor Capidan. Their interventions had obvious pedagogical and propagandist functions. They had the role to inform and educate the audience and the excesses and hints of these speeches, blamed by a rigorous historical critic, were accepted due to the multiple functions they served. The authority of the voices that could be heard was an efficient means to draw the attention. Combining academic style with the average one indicated the fact that the audience had a level of understanding over the average. The documents included in these series can be found at The Archive of the Romanian Society of Radio Broadcasting, and it is a selection, chronologically ordered, of the unpublished programs belonging to the greatest historians of that time.