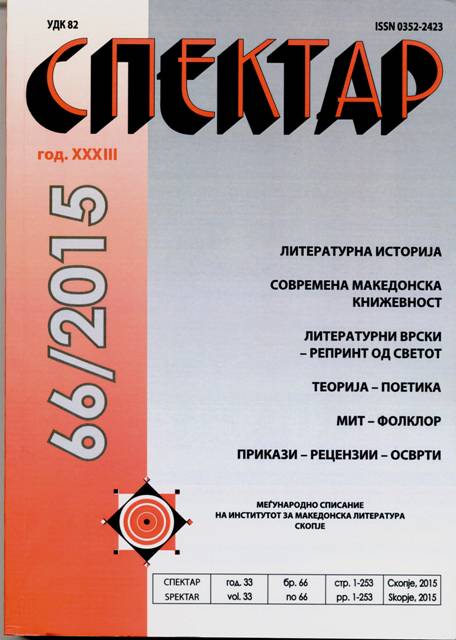 Summary/Abstract: The European topos in the most recent Macedonian novel is accepted as permanent. Namely, young Macedonian authors consider Europe as their home. The fact that they live outside of the European Union or outside the European West (long considered the implicit cultural center of the world) does not make them less European. Originally born in Macedonia, in the former cultural center of Western Europe that already belonged to the periphery, writers such as Goce Smilevski and Olivera Kjorveziroska materialize the “Western European topos” in their works in a seemingly sidelong, nonetheless essential manner. They draw attention to the dark side of Western culture, i.e., the suppressed content official historiography tends to conceal. They remind us that Europe’s spiritual being knows no boundaries and that literature transcends institutional, conceptual, and ethical limits. Liberated from the European stigma (fallacious moral, repressed memory, colonial traumas), these Macedonian authors reveal certain parts of the European Shadow (the collective unconscious, the historical archive piled up with black stains). There is no civilization without its dark facets. That is the law of the Light. That is how Europe is, composed of West and East, but also of North and South. It is liminal and intercultural. In its process of assimilating, it becomes assimilated. The interpretation has been focused on the novels of Goce Smilevski (Conversation with Spinoza, 2002; Freud’s Sister, 2007/2010), Vrakanjeто na zborovite/The Return of Words, 2015) and Olivera Kjorveziroska (Zakluchenoto telo na Lu/Lue’s Locked Body, 2005).