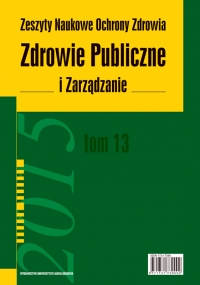 Summary/Abstract: Introduction. Family functioning has an influence on teenagers’ attitudes and emotions. Suppressing emotions usually leads to their intensification or may contribute to persistent emotional distress, which may underlie addiction, disturbed behaviour, neurotic or psychosomatic disorders. Objective. To assess the relationship between the perceived family support and the level of emotional control in the group of teenage respondents. Material and methods. The cross- sectional study was carried out in a group of 1,036 students of secondary schools (688 girls and 348 boys) aged 16– 19. The study was conducted by means of a diagnostic survey with the use of an anonymous questionnaire in an electronic form. In the study the Family APGAR scale and the Emotional Control Scale (CECS) were used. Results. Occurrence of a serious dysfunction in family relationships consisting in failure to receive support was observed in 13.42% (n = 139) of the respondents, and in abnormalities in the level of the perceived support in 27.7% (n = 287) of the respondents. According to the Family APGAR scores, a lower level of the perceived family support was revealed in girls as compared to boys (χ2 = 9.32; p = 0.009). The rate of suppressing emotions was higher in boys than in girls (p = 0.0017). The differences were particularly distinct in areas of expressing fear and anger. A higher level of suppressing negative emotions was observed in the students who revealed a serious dysfunction in family relationships (low level of the perceived support) in comparison to those in whom this type of dysfunction in family relationships (p = 0.00000) was not observed. Conclusions. (1) A dysfunction in family functioning consisting in lack of support perceived by the youth is associated with suppressing negative emotions. (2) Girls indicate lack of support in the family more often. (3) Boys suppress fear and anger to a greater extent than girls, whereas girls are more likely to suppress depression.