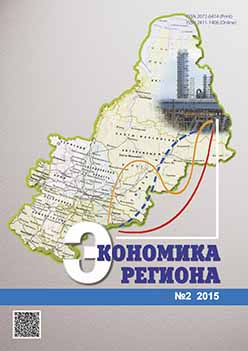 Summary/Abstract: In the article, the authors estimated the social effect of foreign direct investments (FDI) in the regions of Kazakhstan. In order to do it, the authors studied the dynamics of FDI of the region operating enterprises with foreign participation and the regional six indicators of socio-economic development during 2003-2013 on the basis of database of RK Agency on statistics. There are 16 regions of Kazakhstan were involved in the experiment (14 provinces and 2 cities of republican significant — Almaty and Astana). The research was carried out using the “simplified” version of the T. Saati’s Analytic Hierarchy Process (AHP) mathematical apparatus and MS Excel. The constructed economic-mathematical model of an assessment of FDI impact on the population welfare and living quality in the regions was hypothetical as the expert estimates of hypothetical expert were used. The authors made a hypothesis: to receive tools for an assessment of the social effect of FDI in the regions of Kazakhstan — the Rating of regional priority of the factors (RPF Rating). The RPF Rating allowed to define a priority of the factors of the population welfare and living quality in the regions of the country and to calculate aggregate social effect of FDI in Kazakhstan, having allocated the directions of its action on each of six factors in a regional section. The research did not reveal a negative impact of FDI on socio-economic development of the regions; moreover the aggregate social effect of FDI is positive for all regions of Kazakhstan. The authors believe that RPF Rating can become as the important tool of soundness of socio-economic policy in the area of development of public-private partnership in the regions of Kazakhstan, and also positive social effects of FDI growth in the long term — all of this will result in promoting a long-term positive impact on the welfare and living quality of the population of the republic.