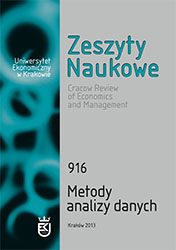 Summary/Abstract: The article compares the results of the segmentation of retirees done using the k-means method on the basis of a set of behavioural variables and a combined set of behavioural, demographic and economic variables. On the basis of the behavioural set, segments of retirees which showed significant differences in the area of life priorities were obtained. Between these groups there were relatively small differences in their demographic and economic profile. In the case of the segmentation done on the basis of the combined set of variables, the results of segmentation were influenced to a greater extent by the demographic and economic variables. The segments of retirees became more easily identifiable, but the differences in the area of behavioural features decreased.