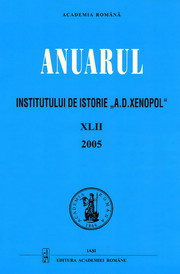 Summary/Abstract: What he failed to accomplish as the Ruler of Moldovlachia (in autumn 1473 or spring 1480) or as Prince of Wallachia (in mid-1481), Stephen III the Great of Moldavia achieved as the King-pin of the Wallachians (since 1492). The transalpine years 1480−1481 seemed to have played a part similar to that of the years 1484−1486 (the crisis caused by Bayezid II’s Moldavian triumph and by Stephen III’s fight for princely survival) and 1489−1490 (Stephen III’s new treaty with Matthias Corvinus and his imposition as regional power factor between Habsburgs, Jagiellonians and the Hunyadi legacy). Altogether, these were the years that placed Stephen twice Habsburg “governor”/ captain, for Wallachia (in November 1473 in Emperor Frederick III’s name) and Transylvania (in August 1490 in Maximilian I’s name, after Matthias’ death in April), on the Western road towards the Dacia of the Venetian Senate (“born” in the first months of 1498 and “deceased” three decades later). Yet it was a road on which Stephen III was not as alone as he wanted to. Part of a much larger regional design, chiefly Jagiellonian had Stephen III been dethroned by the House in 1497 (the complete Venetian bureaucratic formula read Hungaria, Polania et Dacia, to which Croatia – though personally united with Buda – was soon added, “according” to Habsburg, as well as Venetian regional – Hungarian and Adriatic – desires), Dacia seemingly owed her inception to the conflicts of 1470s−1480s. The first “material” political Dacian form emerged at the crusader congress in Rome (March−July 1490). The main army core of the crusade (placed – until the latter’s death – under the joint-command of Maximilian and Matthias, still willing to divide his lands with the former, just to secure a royal crown for his son John) consisted of Imperialis Maiestatis, Serenissimus Rex Romanorum, Hungari, Bohemi, Poloni, Daci et omnes Reges, Principes et Potentatis Nationis Germanice and should have entered the lands of the Turk through Hungariam aut Walachiam. However, Pope Innocent VIII’s crusade faded away so did the Dacians (it is difficult to tell who would have been the monarch of the Dacians had King Matthias not died or had his illegitimate son, John, been enthroned in Buda). As a clear political territory, Dacia emerged after the anti-Jagiellonian victory of Stephen and Maximilian (1497). Based on the never-abandoned Wallachian claims of Stephen and of the transalpine territorial distinctions with which Maximilian rapidly became accustomed, Dacia stood for Moldavia, Greater Wallachia (Muntenia) and Lesser Wallachia (Oltenia). If we were to fully trust Milanese or Iberian reports of early 1498 (the Wallachians controlled “half” of Hungary), Dacia included Transylvania as well. At any rate, through his force (also as one of the richest magnates of the realm, because of the Transylvanian estates granted by Matthias and confirmed by Wladislaw in 1492), Stephen was certainly “the man” for Eastern Hungary of Maximilian, Co-King of Hungary through the Peace of Bratislava (November 1491). Maximilian I even dreamt of reorganizing Christendom (a sort of “pre-” Europa Regina Habsburg style) starting from the East. The Emperor of the Romans and the Pope were the Western authorities (and in fact at that time the only Christian pillars) that could have created new monarchical (royal) crowns (Maximilian was still only the King, but already acted as the Emperor). The main (Dacian) problem for Stephen III, Venice’s captain-general in the East since autumn 1492, proved to be, in spite of his power and of assurances, Wallachia. Reborn under Vlad IV and Radu IV (1487−1503), and pushed further by Neagoe Basarab in the 1510s, Wallachia was to undermine this Dacian hegemonic construct built around Suceava (who also missed out on profiting from Maximilian I’s imperial self-coronation of 1508). It wanted to re-enter Transylvania and restore Moldavia as Little Wallachia. After spring 1523, Stephen IV, the – young – illegitimate son and heir of Bogdan III, Maximilian’s “failed” eastern favourite (especially in 1512−1514), attempted, in Vienna’s name, to bring back the days of his paternal grandfather. The external and inner collapse of Hungary and then the “curious death” of Stephen IV in January 1527 were however to change many of the regional “rules of ambition”. When Suceava betrayed Vienna and then also lost to Krakow, the Serenissima felt it was time to retire Dacia in her mid-thirties.