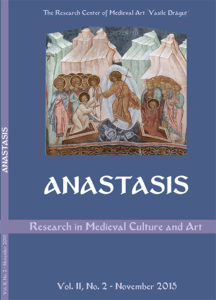 Summary/Abstract: In 1909, the 19th of December, the Roman-Catholic Archbishop of Bucharest, Raymund Netzhammer, a Benedictine monk from the German abbey Einsiedeln, consecrated the Greek-Catholic church in Bucharest dedicated to St Basil the Great. As he wanted to have a church in the Romanian architectural style, he asked the architect Nicolae Ghika-Budeşti to design the project. It was inspired by the medieval Moldavian churches, with a lantern-tower above the nave, apparent brick façades and an outside decoration with enameled ceramic discs. The archbishop intention was to realize a synthesis between Romanian art and the Occidental one. So he decided to invite painters from the well-known in the Benedictine media Beuron School of Art, initiated by Petrus (Desiderius, as monk) and Gabriel/Jakob Wüger from the abbey with the same name. The project for the inside murals was done by father Andreas Göser, who worked in the great Monte-Cassino abbey (Italy), the mother monastery of the Benedictine Order, too, and achieved by two painters from Ravensburg, Schiller and Ostermaier, who signed the cartoons, whose originals are kept in negatives on glass in the Einsiedeln abbey. Paintings were done in the pure Beuron style.The Christ Pantocrator (The Almighty) was painted on the cupola of the tower, surrounded by Angels. The Virgin with Jesus Infant venerated by Angels occupied the semi-cupola of the chancel, as usually in the Oriental churches, and great archangels stood on the intrados of the triumphal arch. Four episodes from Saint Basil’s Life (Baptism, Ordination as a priest, St Basil is giving alms to the poor; St Basil is healing the emperor’s son) were painted on the great surfaces below the arches of the nave. Christ as High Priest was to be found on the Western cupola. On the Western wall, in the Votive picture, the founder, archbishop Raymund Netzhammer, kneeled, dressed in simple Benedictine cassock, and offered the model of the church to St. Basil.As the church passed from the Greek-Catholic cult to the Orthodox one, after 1948, the paintings were covered with a cement layer. This cement layer was removed by restorers, but the state of conservation of the paintings, realized probably with a weak tempera technique, was very poor. A comparison of the new discovered state of conservation of the paintings and the images kept in Beuron archives, shot from the original coloured drawings, could offer an idea of the former decoration of the church.It is the charge of the Greek-Catholic bishop of Bucharest to decide about the future of the painted decoration of the church. My attempt was to give a sort of a virtual image of the church in the first moments of its existence and to pay homage to the enlightened founder, Archbishop Raymund Netzhammer.