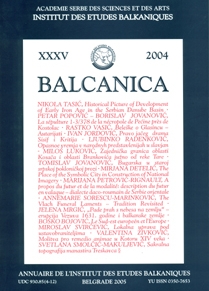 Summary/Abstract: The paper explains the development of local government under the rule of the constitution defenders 1842–1858. The author describes the historical facts that led to the abdication of Prince Miloš and the establishment of an oligarchic government of chieftains assembled in a council (Toma Vučić Perišić, Avram Petronijević, Hadji Milutin Garašanin and his son Ilija, Stojan and Aleksa Simić), as well as the process of building a modern state administration and cultural identity, an integral part of which was a narrower process of constituting local government. A distinct role in the latter process was played by the Austrian-born Serbs, the only intelligentsia in the Principality of Serbia which was still under Turkish suzerainty. Special attention is given to the analysis of two local government acts instituting centralized local authorities with an enhanced law enforcement role in the districts, counties and communes. Those are: District Prefectural System and of County Prefect Oﬃce Act of 12 May 1839, and Communal System Act of 13 July the same year. Of great importance was the former law, one of the longest-lived in the history of nineteenth-century Serbian constitutionalism. It was in force in 1839–88 and 1894–1903. Every autocratic regime in Serbia was to rely on it. Its distinctive feature is that it subordinated district and county prefects to the central authority and to the minister of internal aﬀairs. They were reduced to mere police agents deprived of any freedom of action. Thus the local oﬃcials assumed the character of rigid administrators looking down on the common people. A natural continuation of this law was the other law of communal organization which turned the lowest local units into mere executive agencies of counties. Thus local government took on the form of a mere transmission of the central government, functioning according to a principle similar to the medieval lord-vassal system: my vassal’s vassal is not my vassal.