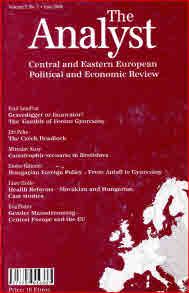 Summary/Abstract: The June elections in Slovakia witnessed a battle between left and right-wing politics, though not in the pure form that one observes in more developed Western social systems. This political clash in Slovakia took place between the reform-oriented centre-right parties in government (under the leadership of Prime Minister Mikulás Dzurinda) and the anti-reform opposition forces of Direction-Social Democracy (Smer-SD) led by Robert Fico. As expected, Smer-SD emerged victorious. President Ivan Gasparovic charged Fico with forming a government, and the prime minister-designate announced his coalition partners barely two weeks later. Internationally, Fico’s choice of partners was greeted with concern and outrage. International observers found it especially disconcerting that the extreme nationalist Slovak National Party attained a position in government. Many shared the view of the chairman of Kalligram Publishers in Bratislava, who emphasized immediately on hearing the announcement of the election results: “The defeat of the right is dangerous because it was defeated by a social democratic party that does not embrace European values. There is no such political grouping in Slovakia, and the chances of such a formation emerging are verging on zero if the social democrats choose extreme nationalist and authoritarian coalition partners. Such a development would only be possible if the victor would somehow strike a political deal with those parties of the Slovakian right that belong to the European People’s Party.” This historical chance was missed by Fico and Smer-SD, however.