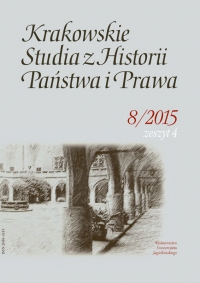 O genezie i praktycznych aspektach funkcjonowania instytucji asesorów sądowych w świetle rozporządzenia Prezydenta Rzeczypospolitej z dnia 6 lutego 1928 r. Prawo o ustroju sądów powszechnych
About the Genesis and Practice Aspects of the Functioning of the Institution of Court Assessors in Light of the Law on the Structure of Common Courts of 1928 given by the President of Republic of Poland

Summary/Abstract: The institution of court assessor, which was introduced by the first Polish nationwide law on the structure of common courts in 1928, later preserved by post-war regulations, and finally eliminated as the result of a ruling by the Constitutional Tribunal of 2007, was restored by an amendment in 2015. The recent changes in the law necessitated an analysis of the origins and range of assessors’ power in the Polish legal system. The idea of mandating court trainees, who passed the judge’s exams, called podsędek, occurred in the course of the Codification Commission. They had the power to perform certain activities assigned to judges, except for the power of adjudicating, which was reserved for independent judges. In the final version of the law on the structure of common courts of 1928 these court trainees were named assessors and it was possible to mandate them (after the amendment of 1929 such mandates were only for a specified time) to perform judge’s activities (including the activities of investigating magistrates), but without the power of adjudicating (art. 260 §2). The constitutional rule of reserving the power of adjudicating only for independent judges was seriously limited by the introduction of a provisional regulation (art. 282 §2), which allowed the mandating of assessors to perform the duties of provincial judges, and to be members of adjudicating panels in district courts. This regulation, criticised by legal doctrine and judicature, was an exception to the rule defining the status and scope of the functions of the assessors. Consequently it started a breach which allowed for delegating the authority to adjudicate to assessors. The number of assessors was growing and in the mid-thirties the number of assessors was nearly equal to 1/6 of the number of judges.