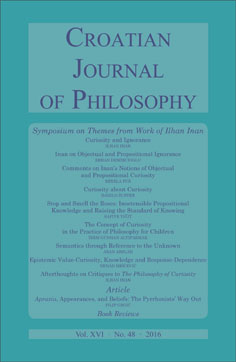 Summary/Abstract: According to the objection of inactivity (apraxia), the skeptics cannot live their skepticism, since any attempt to apply it to everyday life would result in total inactivity, while any action they would perform qua skeptics would be a sign that they abandoned their skepticism. In this paper I discuss the ancient Pyrrhonists’ response to the objection as is presented in the writings of Sextus Empiricus. Sextus argues that the Pyrrhonists are immune to the apraxia objection because it is based on the misunderstanding of their position, that is, on the wrong assumption that they live in accordance with philosophical logos. To live in accordance with philosophical logos includes two things. First, it includes the idea that one should apply one’s philosophical tenets, concepts and recommendations to ordinary human life and use it as a practical guide. However, the only item that survives skeptical philosophy, appearance, is not used in this way: its role as criterion of action is different. Second, it includes the idea that ordinary human life can be, and should be, described in philosophical terms. However, the skeptics refuse to describe their actions in philosophical terms. More specifically, they refuse to describe their actions in terms of beliefs: from the Pyrrhonists’ point of view, the question “Do you have beliefs?” is misplaced, since any answer to it, affirmative or negative, is as credible as any other, since it is about something non-evident.