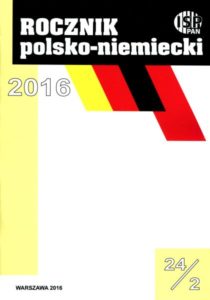 Czy zbrodnia wołyńsko-galicyjska 1943-1945 była ludobójstwem? Spór o kwalifikację prawną "antypolskiej akcji" UPA
Were the Massacres of Poles in Volhynia and Eastern Galicia in 1943–1945 Genocide? A Discussion about the Legal Classification of the ‘Anti-Polish Operation’ Conducted by the Ukrainian Insurgent Army

Summary/Abstract: The anti-Polish purges carried out by the Organization of Ukrainian Nationalists-Bandera (OUN-B) and the Ukrainian Insurgent Army (UPA), which are known in Polish history as the massacres of Poles in Volhynia and Eastern Galicia, claimed the lives of about 100,000 people. These purges were among the bloodiest episodes in Poland’s twentieth-century history and among the major mass killings of civilians during World War II. Moreover, they were committed by an irregular partisan formation. In terms of scale, the massacres in Volhynia and Eastern Galicia can be compared to the mass pacification of Belarusian villages by German police formations and the massacres of Serbs by Croatian nationalists.Historical research indicates that, regardless of whether the objective of the OUN and the UPA was to exterminate or ‘only’ to expel the Poles, implementation of their plan must have assumed the killing of the Polish population, or at least part of it, in the disputed areas. Therefore, further research conducted in Poland confirmed the conviction about the genocidal nature of the UPA’s activities. Jędrzej Giertych was probably the first Pole to use the term ‘genocide’ in this context. He used it in the London-based literary weekly ‘Wiadomości’ [News] in 1951. In the second half of the 1990s, this opinion became dominant among scholars dealing with the issues in question. Similar conclusions were reached by prosecutors of the Institute of National Remembrance. It seems that their evaluation could not be different in the light of the definition of genocide specified in Article 118 of the Polish Criminal Code.Polish scholars argue, however, whether the term ‘genocide’ should be used in reference to all of the activities conducted by the OUN and UPA in the years 1939–1947, or only those conducted in the period from 9 February 1943 to 18 May 1945, known as the anti-Polish action (mass murders). They also argue whether the UPA’s actions were typical genocide, or should be considered as a specific example of cruel genocide (genocidum atrox) due to their ferocity. Some scholars are inclined to recognize the UPA’s ‘anti-Polish campaign’ as ethnic cleansing rather than genocide, but the scale of the crimes against the Polish population seems to undermine this opinion.The author suggests that the massacres of Poles in Volhynia and Eastern Galicia should be recognized as ‘genocidal ethnic cleansing’, or ‘ethnic cleansing that meets the definition of genocide’, as the terms indicate that from the very beginning perpetrators committed ethnic cleansing in the regions with intent to conduct mass murder of civilians.