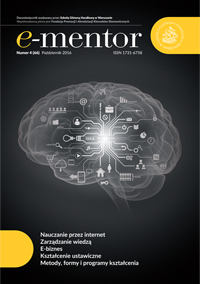 Summary/Abstract: Sharing economy was supposed to be a phenomenon leading to a reform of the socio-economic system. However, monetization of work performed by online communities collaborating towards creation and maintenance of portals such as Uber and Airbnb triggered the formation of a model of capitalism which rests upon the idea of corporation as a broker in transactions between individual providers and the recipients of services. The adverse effects of "platform capitalism", i.e., excessive concentration of ownership and relaxation of employment, have led to a countermovement, namely platform cooperativism. This article analyses the phenomenon of platform cooperativism, that is, the movement which aims at revising the current direction of the development of sharing economy by suggesting an alternative, socially-distributed ownership and management model. In order to achieve that, we expose the main tensions accompanying the expansion of sharing economy which is interpreted as a "double movement" in Karl Polanyi's terminology, or public opposition to the commodification of further spheres of social life. We contend that the tensions between corporate sharing economy and platform cooperatives touch upon issues critical to economic theory, such as the boundaries of work, management and profit distribution, as well as the meaning of innovation.