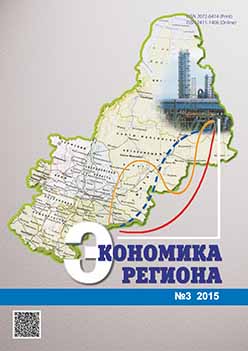 Summary/Abstract: he article is devoted to the problem analysis of the competitiveness of the Russian regions and to the development of the methodology of its increasing. The author’s hypothesis is that when supporting the priorities of increasing the region’s innovation competitiveness, one must take into account not only region’s scientific and technical, and innovation potential, but also peculiarities of interaction of innovation and socio-economic development of the territories. This is because the region’s innovation competitiveness is manifested in its ability to create innovations as well as to increase on their basis the resistance of the territory, and, therefore, initially, it quite closely linked to its industrial and technological type. On the basis of the conducted data analysis of the state of research and innovation potential of the Russian regions, the main trends and causes of the continued weakening of their innovation competitiveness are identified. In modern Russia, this is mainly caused by the lack of politically significant groups whose economic interests are closely linked to the development of mechanical engineering, high technology and restoration of the industrial production structure. The interdependence between the socially necessary level of the region’s innovation competitiveness and the need for innovation industries with high technology levels are showed. In the article, the methodical approach is proposed for determining ways of increasing the innovation competitiveness of the Russian Federation’s regions. It is showed that they should be developed on the basis of coordination of interests of preserving and strengthening the research and innovative capacities of the country, on the one hand, and the needs of increasing the vitality of the territories on the other. In view of the statistical base, the integral index of development priority in the centers of innovation activity aimed at enhancing the resistance of the different degrees of knowledge-intensive industries was developed. The results of the ranking of the subjects of the Russian Federation according to the priority of development there the centers of innovation activity of high-tech, medium-low (on the example of metallurgy) and extractive industries are presented. The proposals for improving the competitiveness of the Russian Federation’s regions of the above-mentioned production-technological types are formulated. The article is addressed to professionals in the field of theory and practice of the management of innovative processes.